The Magus of Genesis — Chapter 2

At that time, I thought I’d been saved.

But now that I think back on it, I should have run away.

​ Ten years of me as a Dragon passed in the blink of an eye.

​ I’d finally gotten used to living as a dragon and had even reached the point that I could safely fly in the sky, but I was at a loss.

​ The reason for that was because Mother Dragon drove me out of the den.

​ I say that I was driven out, but it’s more like it was time for me to leave and make a den of my own.

​ As I flew through the air thinking about what I should do from now on, I saw something strange happen in the forest far below me.

​ The large, tall trees were rustling back and forth, falling one after another.

​ When I focused on it in wonderment of what was happening, my hawk-like eyesight as a dragon allowed me to catch glimpses of a small girl dashing through the forest.

​ Her breathing was rough as she desperately ran through the forest.

​ Weaving her way through the trees, she slid under the root of a massive tree like it was some kind of archway.

​ Is she running from something—?

​ As if to confirm my thoughts, the massive tree’s trunk shook and cracked the instant I thought that. Just as I started to wonder what had caused it, the tree fell apart, exposing a dark red beast.

​ It’s wide with round ears and short limbs.

​ To relate it to an animal, I’d say it looks like a bear.

​ But what I’m seeing right now is obviously not the same kind of bear that I know, even to a non-animal expert like me.

​ Its body is easily longer than five meters.

​ It has thick and long claws that look like swords growing out of its bulky arms.

​ Scales were covering its body instead of hair. It looked like it was wearing heavy armor like an old war general.

​ Given its characteristic scales, let’s call it an armored bear. Even ignoring the fact that its claws just wrecked that tree, there’s no doubting that it’s a very dangerous creature. If that young girl gets hit by its paw, the only outcome would be her getting blown away in multiple pieces.

​ And it was closing the distance between them.

​ Pulverizing any and all obstacles with a swipe of its claws, the armored bear easily closed the gap that the girl ran so desperately to create.

​ Seeing the armored bear lift its arm up and imagining the inevitable result, I shouted out on reflex.

​ My prediction was off the mark.

​ I stared at the spectacle occurring right before my very eyes.

​ Just when I thought that the girl was going to turn around and get hit, several trees started to move and block the armored bear’s path.

​ They weren’t much of an obstacle to the armored bear though, of course. However, the trees shot their leaves at the armored bear’s face as it tried to bash away the branches to get at the girl. Their roots shot up out of the ground and twined themselves around its feet. The little girl made use of the time she had earned to run away like a rabbit.

​ The thing I’d yearned for my entire life.

​ I’d never mistake what that small girl did in order to escape from the armored bear that dwarfed her in size.

​ Even though that wouldn’t buy her much time either.

​ The girl’s pace gradually slowed, and judging by how the trees stopped moving about as quickly, the magic she’d used had its limits as well.

​ Seeing part of the girl’s hair get cut away by the armored bear’s claws as it swiped at her, I made up my mind and flapped my wings. The girl’s figure growing within my field of view as I drew closer, I broke a number of branches and landed in front of her.

​ The girl’s breath caught in her throat for a moment as she fell backwards onto the ground. She’d been running away from the armored bear for so long and saw a dragon appear out of no where, so it’s not like I can’t sympathize with her.

​ But to be honest, I also want to do the same.

​ Now that I’m seeing the armored bear stand on its hind legs up close… it’s much bigger than I thought it’d be.

​ Even taking the fact I’m on all four into account, it’s easily twice as big as me.

​ I might be a dragon, but I’m still just a ten year old juvenile. Mother could probably finish it off just by glaring at it, but for me it’s like trying to stare down a mountain.

​ I shouldn’t have butted in.

​ I regret it from the bottom of my heart.

​ I’m no good when it comes to confrontation. I’d never even gotten into a fight in my previous life.

​ Even with my current body, it’s just too much for me to have my first fight with what could easily be dubbed the Lord of the Forest.

​ I glanced at the girl on the ground beside me. I can’t be too accurate since this is the first time I’ve seen a human in this world, but I’d say she’s somewhere between fourteen and fifteen going by the standards of my previous life.

​ There’s no way I could abandon such a young girl. I couldn’t abandon her all the more since she was someone that could use magic, something I’ve been searching for as long as I can remember.

​ I tried to say that while still keeping my focus on the armored bear, but as she hadn’t so much as twitched, it appeared that the girl couldn’t understand me. Even though I might’ve been able to escape into the sky if she’d just ran away…

​ My voice had the opposite effect I’d intended, though, as the armored bear appeared to take it as a form of intimidation and charged at me.

​ I didn’t have the time to say that as the armored bear closed the distance between us in a flash, its sharp claws hurling toward me.

​ It was so sudden that I couldn’t even dodge. I instead shut my eyes out of reflex.

​ I heard a dull, cracking sound once the attack landed on my neck.

​ My neck hadn’t caused the cracking sound. It was the armored bear’s claws.

​ Staring at its claws, we were all dumbfounded. I mean, it’s not like I’d done anything at all.

​ It’s claws had simply been unable to withstand the force of it swinging all-out at my scales.

​ The first one to come back to their senses from that was, as expected, the armored bear.

​ It grabbed on to my shoulders with both of its forelegs as though it were about to embrace me. I recall hearing that the strongest muscle of not just bears, but practically all wildlife was located in their jaws. It had switched to its strongest method of attack the moment it realized that its claws didn’t work on me.

​ All I did in response to this Lord of the Forest coming at me with its strongest attack… was shout. Pathetically, even.

​ Even so, the armored bear cried out and separated from me in a panic. The area around its chest had been burned and white smoke wafted up from the area. I was confused for a moment as I tried thinking about what happened, but I figured it out quickly. It got hit by my breath.

​ Although a dragon’s breath had more of a killer move vibe to it in the literary works of my previous life, that’s just not how it is for this body I’ve reincarnated into.

​ It’s not like it’s a technique either. Just like how humans breathe in oxygen and breathe out carbon dioxide, Mother and I breathe out fire. Flames come out of my mouth just by me breathing normally. That’s just the kind of creatures dragons are.

​ Still, judging by how that giant armored bear started leaping around and whining, it looks like the flames inside me are hotter than I thought they were.

​ I might be able to manage this somehow if I can damage it just by breathing. When I took a step forward toward the armored bear, it went onto all fours as well and looked as though it was going to charge me. So this is the spirit of a lord? It looks like it doesn’t even care if it’ll suffer a mortal wound.

​ Seeing the armored bear shoot at me like a bullet, I opened my mouth a small amount and let out a large breath. I’d practiced doing this a long time ago, so I knew that this would allow me to shoot out a more focused flame. I’ve been playing around with various kinds of flames ever since I was reincarnated as a dragon, after all.

​ This was the first time I found out just how strong it was. That is, I’d never aimed my breath towards a living thing before. Smelling the scent of charred armored bear in the air, I shuddered at the result of what I’d caused. It was blown backward, its head—and even its skull—gone.

​ When I looked at the girl next to me, she was staring at the armored bear’s corpse, trembling.

​ She’s probably wondering if it that is what is about to happen to her, I guess.

​ I gazed into her eyes as she looked at me with a frightened expression on her face.

​ A little while passed and she managed to calmed down somewhat.

​ Unexpectedly, the girl opened her mouth and said something to me. It sounded like she’d asked me some sort of question, but I don’t know what it was as she spoke in some language I’d never heard before.

​ I spoke slowly with my face aimed toward the ground. I’d lower my weapon if I had the body of a human to show that I wasn’t hostile, but unfortunately, my entire body was, effectively, like a weapon. I did at least put my chin against the ground so that she wouldn’t see any fangs or flames.

​ Saying a few words that were slightly different just a moment ago, the girl approached me cautiously. With that, I finally noticed that she was somewhat different than the humans that I knew of.

​ The tips of her ears peeking out of her golden hair were tapered into points.

​ Her features, still left with much of their youthful innocence, were unbelievably well-ordered.

​ Her face was surprisingly small with blue, almond-shaped eyes situated beneath a pair of thin eyebrows. She had a strong nose with a cute pair of lips that reminded me of flower petals. She looked like she had a slender figure under what appeared to be some unprocessed silk-like material she was using as clothing. The color of her skin was more reminiscent of Northern Europeans than anything and her slender limbs made her look like a young model. Although she was dirty in a few places due to her earlier attempts at escaping that beast, it definitely wasn’t enough to even begin to conceal her beauty.

​ She looked entirely like the elven race often described in my previous life’s fiction stories.

​ Not daring to answer her, I waited to see what she was going to do.

​ Placing her palm against my muzzle, she muttered something.

​ Mimicking the sound she made, I spoke. 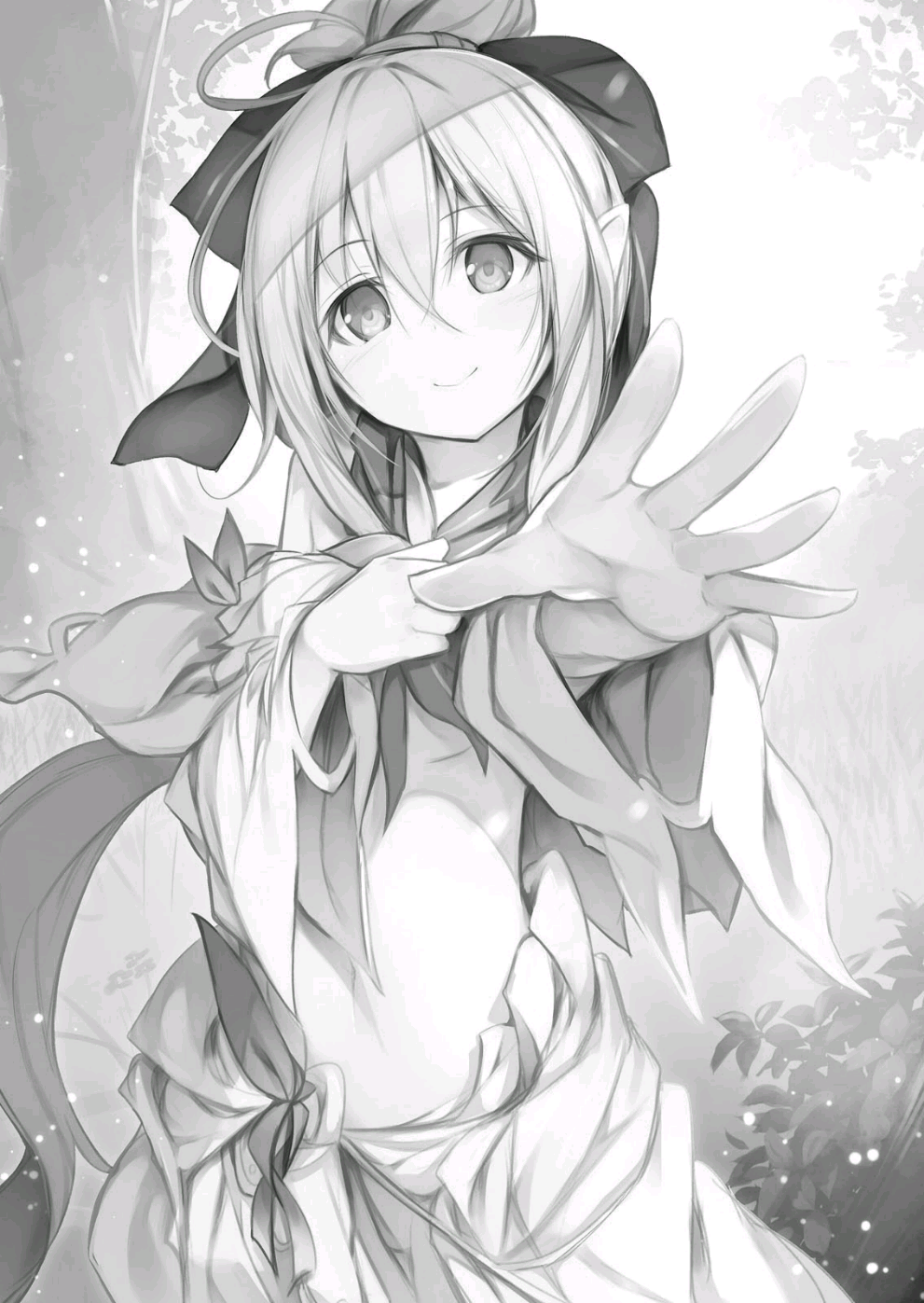